Always be sure to check and recheck your gear.

Now that the magpul DVDs have been out for a while and it seems everyone has seen them, I have noticed a few common ideas about them people seem to have especially on internet forums.  A lot of people I talk to about them seem to miss some of what I think is the real point and value of them.  they obviously can not substitute for real hands on training, but they do have some real benefit despite what some say. Mainly I think the point lost on a lot of people is the video really help with weapons handling and manipulation. Even if you are a long time AR15 user, you can learn some pretty good stuff, even if you do not adopt  their procedures it gets  you thinking ( if you have enough brain) about cleaning up your own sloppy actions.

If you do choose to use their version of each operation its still some good stuff.  Its in style now to rag on them and make all the useless and pointless tier 1 jokes in a worn out attempt to be sarcastic, but in doing so, some real chances to learn are lost.  I for one have become a lot smoother with my weapons manipulations and have even modified some of what they teach to better fit me. You do not have to do it exactly their way but it is a great starting point for basic manipulations and smoothing your own self out.

Another thing people seem to  get the wrong idea bout is speed, or how fast they can put 5-10-20 whatever rounds out. We have seen a lot of guys shooting at ranges who seem to think the point is to get the mag half empty in 3 seconds even if they hit the dirt 5 feet in front of them!! The videos do not demand  1 MOA groups on target, but a balance between  speed and accuracy that is good but not slowfire at the NM good.   But it seems that because it is so cool to see those two guys  dumping rounds on target in seconds people just forget you also need to actually hit with those rounds. The more the offender seems to blaze away at a break neck speed,  the worse they were at just plain marksmanship to start with.  The idea being forget precise shooting I will just do a mag dump!  Few seem to want to train smooth a slow so they never gain the speed that  comes through the repeated movements done correctly. 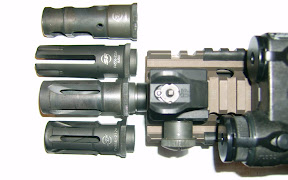 We have a multitude of wonderful options in muzzle devices now for our rifles.  However I have been seeing some odd trends that disturb me.  First I run into many people running muzzle breaks on short barreled rifle (SBR) variants. These short 5.56 rifles only gain marginal recoil reduction, and the cost of a large increase of flash and blast, almost always annoyingly so.  Several of the owners of these short rifles tell me that their rifle is their home defense gun.  I do hope that they never need to fire those rifles indoors with out hearing protection.  Pronged flash hiders are also coming back into style.  These tend to be more effective then closed ended flash hiders, but many will ring like a bell when tapped or as the rifle is discharged.  Sometimes prongs can be bent, or they can bloom like a flower.  I recommend against pronged flash hiders on full length rifles, and on firearms that are going to be used in think brush.  However these pronged flash hiders are an excellent choice for the sub-16 inch .30 cal rifle and for SBRs as they mitigate flash and blast better then many of the enclosed flash hiders.  One last note, some flash hiders have sharp edges, points, and/or barbs for use as a impact weapon.  I highly recommend against these as standard flash hiders work well in that role, and the expensive specialized ones end up just cutting holes in your range bags and cases.

Got to shoot a Ruger SR556 last Saturday.  Recoil was smooth and pleasant, the narrow railed hand guard felt nice in the hand.  However when I field stripped it, I found metal shavings under the rear take down pin all the way up under the bolt catch.  Bolt carrier tilt was shaving metal from the buffer tube.  While shooting the Ruger rifle was nice, it looks like they have not worked out all the kinks yet.