By Luis Valdes from www.newwavefirearms.com

The Remington 870 is one of the best, most popular pump action shotguns ever designed. With over 11 million of them built since 1950, this shotgun has seen service across the globe as a personal defense weapon, backwoods hunting gun, clay buster, law enforcement tool, and even as a war machine. While military-configured model 870s are some of the most sought-after versions, sadly, very few have ever been surplussed.

According to Bruce N. Canfield’s fantastic book, Complete Guide to U.S. Military Combat Shotguns, the Remington 870 started its career as a military combat weapon in the 1960s. The U.S. Marine Corps was looking for a new shotgun to replace their WWII-era Winchester Model 1897s and 1912s. In 1969, Remington Arms answered the call with the 870 Mark 1.

The Mark 1 is a Remington Model 870 Wingmaster with a 21-inch barrel fitted with a special bayonet adapter for the M16’s M7 bayonet, and rifle-style front and rear sight combo. It came with an extended magazine tube with an 8-round capacity and sling swivels to use the then standard OD Green Cotton Canvas M14 sling. A total of 3,230 Mark 1 shotguns were delivered and saw combat towards the end of the Vietnam War in May 1975 during the Mayaguez crisis.

Additionally, a “riot” configuration of the 870 Mark 1 was developed by Remington for additional sales and sold as the M870. The 21-inch barrel was replaced with a standard 20-inch cylinder bore tube and the iron sights were replaced by the classic bead sight.

A shorter handguard on the police contract guns was used instead of the longer one on the Mark 1. The iconic bayonet adapter of course was used. Various branches of the services purchased these guns, most notably the U.S. Air Force, U.S. Navy, and a number of state National Guards.

Few if any of these shotguns have ever been released on the civilian market as surplus and parts to build reproductions are hard to find and expensive.

Until now that is. A total of 1,286 Remington 870 shotguns originally ordered by the Ohio National Guard were sold as surplus by Sportsman’s Outdoors Superstore. 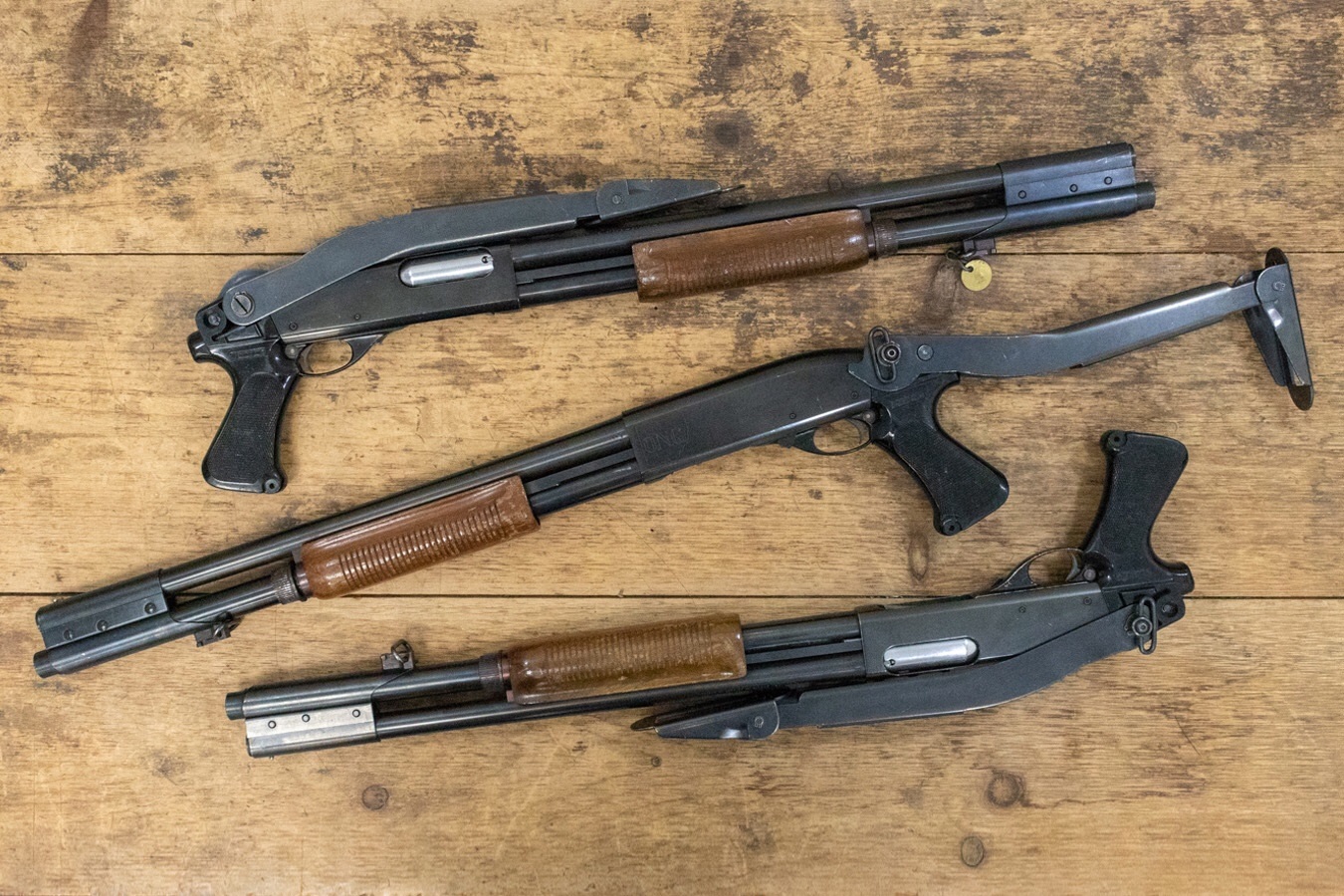 These shotguns were ordered by Ohio National Guard in 1971 and used for state service until just recently. Most of the time, they were used for training and weapons qualification.

Cpl. Perry Cossey, teaches soldiers how to properly load during the Shotgun Qualification Range at Camp Perry, Ohio. May 2006

Spc. Brian Johnson, loads his 870 on the shotgun qualification range at Camp Perry, Ohio. May 2006

There are two famous incidents where these 870s were put to use.

The first is the 1993 Lucasville Prison Riot. For 11 days, starting on April 11 (Easter Sunday), 450 prisoners formed an unlikely alliance between prison gangs like the Gangster Disciples, Muslims, and Aryan Brotherhood. They rioted and took over the facility.

A total of nine inmates and one correctional officer were killed. Ohio Governor George Voinovich ordered the National Guard to assist the State Police in securing the prison perimeter to prevent escapes and take direct action if needed.

You can read the entire report from the Ohio National Guard’s magazine by clicking here.

The other famous incident in which these shotguns saw deployment was 2005’s Hurricane Katrina. The Ohio National Guard was deployed under state orders by Ohio Governor Bob Taft and to Louisiana to take part in recovery efforts. As such, the Ohio National Guard took part in restoring law and order and wasn’t restrained by the Posse Comitatus Act, even though they were outside of their state’s borders. 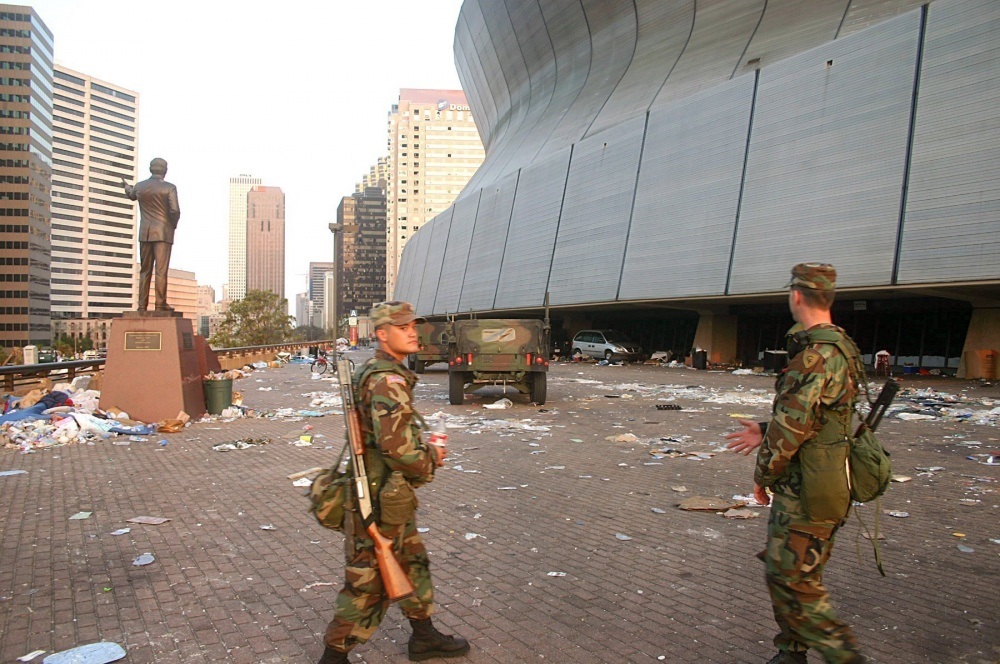 Soldiers of the Ohio Army National Guard’s 1st of the 148th Infantry were the first out-of-state Soldiers to assist in the evacuation of the Louisiana Superdome.

Soldiers of Company D, 1st of the 148th Infantry Regiment, Ohio Army National Guard make their way around one of the many washed out areas in a North Eastern portions of New Orleans. The Soldiers were performing search and rescue operations as part of Operation Katrina.

If you’d like to read the direct recounting of events that the ONG took during Hurricane Katrina., click here for the December 2005 issue of Buckeye GUARD.

These guns played a small, but important role in the Ohio National Guard’s history and are one of the few legit military contract Remington 870s ever released to the civilian market. Combat shotguns are a hugely popular subculture in collector circles, but actually have a smaller pool of guns due to smaller orders placed during government procurement since combat shotguns aren’t primary combat weapons. Original Winchester 1897s and 1912s from WWI and WWII are hard enough to find and Vietnam era Ithaca M37s are even more scarce.

As mentioned earlier, to my knowledge, no Remington 870 Mark 1 has ever been sold surplus and very few M870 shotguns have been.

The Mossberg 500/590 series of shotguns is the most commonly encountered shotgun in military service at the moment. And when everyone thinks of the Mossberg combat shotgun, they of course think of this:

The classic Mossberg 590A1. But to put this in perspective, the original procurement specifications called for three types of shotguns.

The Type 1 called for the classic trench gun configuration. That meant a heat shield and the ability to mount a bayonet. Only about 1,000 were ever ordered in that configuration and the majority of them were went to U.S. Marine Embassy Security detachments. 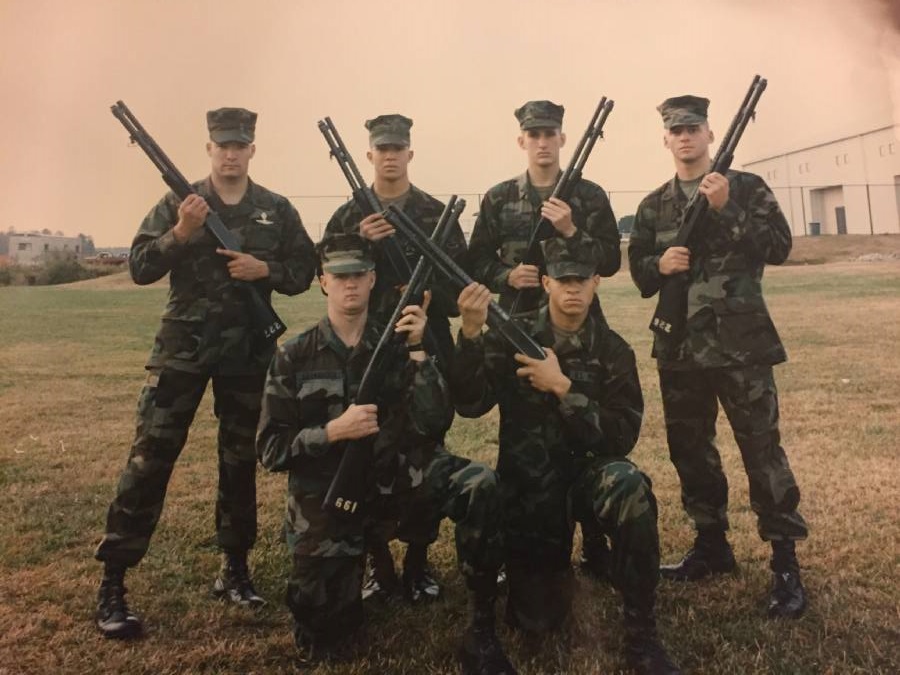 The majority of Mossbergs in service are the Type II. These are either 18-inch or 20-inch barrel length 500s or 590s. A few were made for the Navy with 17-inch barrels, but none of these have the ability to take a bayonet.

The Type IIIs were another specific design request that has never been ordered. So right now the majority of shotguns in service are basic commercial configurations that are no different than you can find in Walmart or Bass Pro Shops. Luckily, even though the Type I-configured Mossbergs might be small in number in official military service, Mossberg provides them commercially to this day. Remington never did that with the Remington M870.

So one of the last specific military designed combat shotguns with an actual history of military use has been released to the market and I was lucky enough to get my hands one on.