ALT TITLES:  WHEN GUNS ARE OUTLAWED ONLY OUTLAWS WILL BE CHINESE KINDERGARTEN TEACHERS.

Ah,  a nation without guns.  A communist utopia where no decadent oil obsessed yankee capitalist  aren’t around to  go on a shooting spree and the state takes care of your security  and all other needs.   The dream of the Bloomberg and Polosies of the world.    Why, death by other than natural causes must be completely unheard of right? 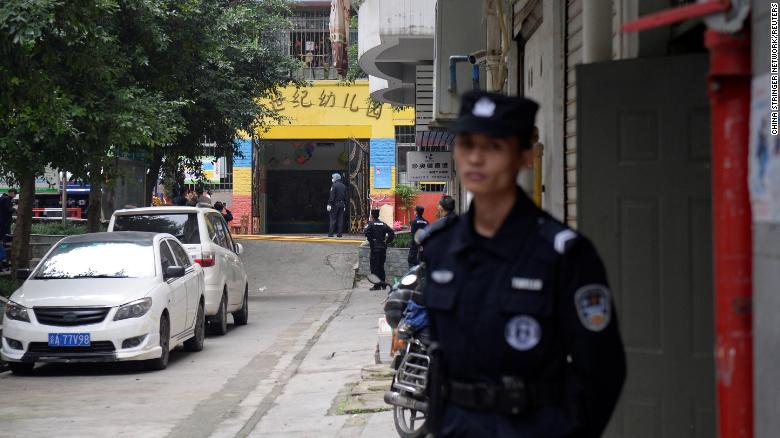 Police officers are seen outside the gate of a kindergarten where a woman armed with a kitchen knife attacked children in Chongqing on October 26.
“It happened when the children were entering the school gate …(what happened?
The attacker just ran at them with a knife. The teachers were dumbstruck,” said Zhang Jing, who lives close to the school.
wait a second. This can’t be right. Chinese peons don’t have firearms.  Clearly this must have just been some sort of Chinese Halloween.

He told CNN old people out shopping for groceries had intervened to stop the attack.
Good for them for acting quick and decisively.

An unknown number of students were taken to a nearby hospital following the incident, according to police.
Video from the hospital showed adults wailing in grief as children covered in blood were rushed from ambulances into the building. In another video, a child whose head is wrapped in bandages was pushed past on a gurney, as crowds looked on.

A crazy person with a knife can do grievous  harm with nothing but a knife.  I am gonna assume everyone reading this site is already well aware of the threat of some one with a knife closing the distance on you even if you have a gun in your hand.  one can imagine the damage a determine kook can accomplish against children.
Zhang said after the knife attack and recent scandals over faulty medicine for children, he’s increasingly skeptical of the government’s ability to look after his own daughter.
Skeptical ?   He is starting to finally start to consider the small possibility that the communist dictatorship doesn’t really give much of a solid crap about the people under its heel.  As hard as that may be to accept, we think he may be on to something.
“It is terrifying. The vaccines are faulty, the food is faulty … and right now even the security is problematic,” he told CNN.
why, it’s almost like you can’t depend on the government to protect you, Communist or on its way to communist or otherwise.
Friday’s incident isn’t the first time school children in China have been hurt by people wielding knives. Nine students were killed at a middle school in Shaanxi province in April by a 28-year-old man who was later sentenced to death.
According to state media Xinhua, the killer had wanted to “get revenge on his former classmates who had teased him” and had bought the knives online.
In 2017, 11 students were injured after a man climbed over the wall of a kindergarten with a knife and began attacking them.