No, not steel. This heavy metal is the kind that pours out of Marshall stacks.   In this case the title is a bit inaccurate but I couldn’t pass up the chance to use it.  It wasn’t the metal itself  it was the heavy metal fan. 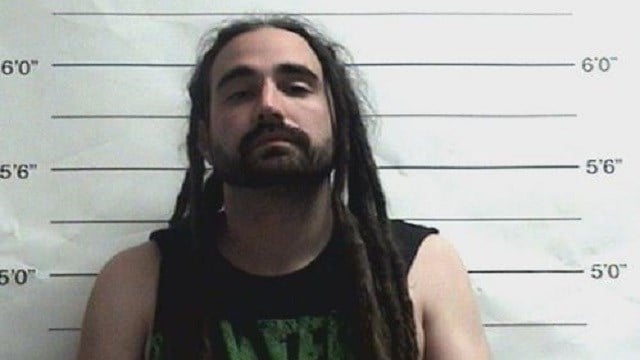 Simon Morris is charged with manslaughter after he beat a man to death who tried to steal his wallet, authorities said. (Orleans Justice Center jail)
“Simon Morris snapped when a man swiped his wallet outside an Uptown gasoline station Friday morning.”
Hey who wouldn’t? With gas prices the way they are who among us wouldn’t snap when robbed at the gas station?
“He chased the thief across the street and beat him to death with his fists and feet, New Orleans police said.Morris, 31, faces a count of manslaughter after the killing of a man identified in court records only by the name Edwin.”

The “victim” in this case being also the perp.    Was given some swift and decisive instant karma by Metal Morris meted out Some Metal Melee Moves and walloped and wailed on the wallet snatcher.

“According to police, Edwin approached Morris and asked him for a dollar outside the Express Mart Gas Station at 4140 S. Claiborne Ave. about 8:20 a.m. Friday. But Edwin then reached into Morris’ back pocket, snatched his wallet and ran across South Claiborne at Milan Street.”

Anyone who knows anything about street crime can tell you panhandling and begging are often a way to approach a target for either a snatch and grab or something more sinister.  The scum bag usually reacting to the body language of the target and judging how soft or hard the targeted person is. In this case it seem the thief judged wrong.

Morris caught up with him in the rear driveway of Hi Class Customs, an upholstery and window tinting shop at 4201 S. Claiborne. Morris wrested his wallet back and then began beating on Edwin with his fists, police said.”

“At least two people tried to restrain Morris. But he kept punching and then started kicking Edwin, who “was begging Morris to stop and was attempting to cover his face and body,” police said.

No doubt Morris would have been in a lot less trouble had he stopped at this point. Or at least in most parts of the country not run by the democrat party.   Continuing to stomp the thief into a mud puddle after he was no longer capable of putting up a fight and while at least two other people tried to  pull him away.  This was be akin to shooting a home invader after they ran out the house, you ran outside and half a block to shoot them.  No matter how righteous and deserved it may be.

Morris battered Edwin’s head and body “for a duration of five minutes or more,” police said. He didn’t stop until one of the witnesses managed to pull him off. The witness said he feared Morris would try to beat him up as well, according to police.”

Metal Morris may have a touch of madness it sounds like it.  Or he really had his blood up.   Had this happened in the mid 90s  Pantera would not doubt be getting the blame  for this. Unfortunately both founding brothers of the Grove metal band  are now dead.  Though their music will live on longer than the robber will.

“Paramedics took Edwin to University Medical Center for treatment, but he died there not long after arrival.

Officers detained Morris and later secured a warrant to jail him on a count of manslaughter.

I would almost bet some of those officers  felt some what sympathetic to Morris.   But in this case they had little choice.

In Louisiana, manslaughter is defined as a killing that is carried out in the heat of passion following a provocation that would cause an ordinary person to lose self-control. The crime calls for a maximum of 40 years in prison but doesn’t include a mandatory minimum punishment.

40 years for a reaction to something the law  says  would cause an  ordinary  person to lose self control.   I would bet the rice paddy that there are “victims of society” who have had 30 year records of more heinous crimes that haven’t served 40 years between any 5 of them in New Orleans.    Morris being  himself a victim in this case will no doubt result in him having the book thrown at him. Maybe he needs the same lawyer as  The Zimm-Zam Man!

Morris made an initial court appearance Friday evening in front of Orleans Parish Magistrate Commissioner Brigid Collins. She set his bail at $150,000.”