I am a big fan of the ACOG.  Trijicon’s prism powered fixed 4X scope is hard to beat.  I love ACOGs and it has been a hobby of mine to buy them cheap and later sell them for a profit.  Just Wednesday, I picked up a M150 ACOG, which got me thinking about models of ACOGs used by out military.

The military has experimented with some various models of ACOGs, but these are the main models it has fielded.

TA01NSN  The “4X DOS” Day Optical Scope is a fixed four power scope with a bullet drop reticle calibrated for the M855 round in the M4 out to 600 meters.  This model is still very popular in and out of the military.  The 01NSN has a more traditional crosshair with amber tritium illumination and has the very noticeable back up iron sights on top of the optic.

TA31F  Adopted by the U.S.M.C. as the ACO.  The TA31 has additonal fiber optic illumination to add to the tritium in the optic.  The bullet drop reticle features a bright red chevron and goes out to 800 meters.  The BDC is averaged to work on both the M4 and the M16.  The ACO was replaced with the RCO model in the U.S.M.C., but ACO’s were still in use as long as they were serviceable.  One of the Motor T Marine I knew was issued a TA31F in 2006.

A TA31F, showing the lack of back up iron sights, and the prominent fiber optic tube.

An RCO-A4 with kill flash in a Larue RCO QD mount sitting next to a rifle.

TA01ECOS  SU237/PVS  SOCOM adopted a newer model to replace the TA01NSN.  The ECOS ACOG was a TA01NSN that was tan, and had a reticle that included a BDC from 700-1000m for the M249.  The back up sights were mounted offset, allowing for a piggyback Docter sight to be mounted.  Around the time this was adopted, SOCOM also adopted the Elcan Specter DR, which has kept this model from being seen in use much.  One picture shows that some of these had the Docter and offset irons removed and the TA01NSN irons installed when issued to servicemen training to be SEALs.  The 1/3 MOA adjustments of the standard ACOGs were replaced with a capped 1/2 MOA turret that also increased the water resistance of this model over standard ACOGs. 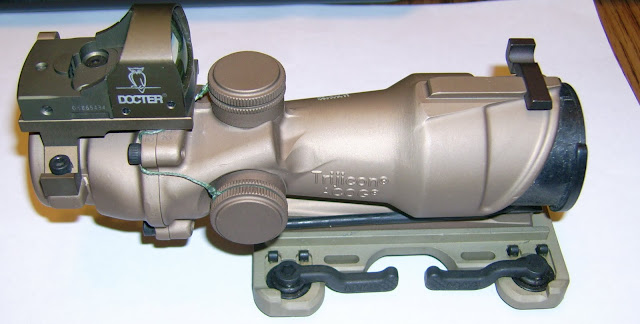 A TA01ECOS showing the piggyback tan Docter sight, offset back up front sight, kill flash, and the ARMS mount.

TA11SDO  Reletivly new compared to the others, the Squad automatic weapon Day Optic (SDO) is a 3.5 power ACOG based off the TA11 series.  Adopted by the U.S.M.C. in 2010 for use on the M249 and the M27 IAR, this ACOG has longer eye relief, a horseshoe reticle , piggyback RMR mini-red dot, and Larue mount.

Some of the 6x ACOGs have been fielded for use on the medium and heavy machine guns, but rarely are those discussed.